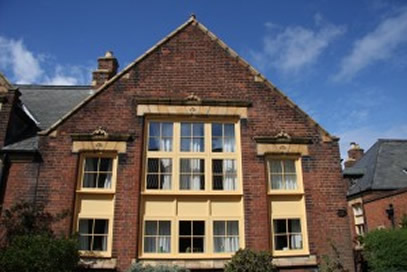 Brief: When we were approached by Mr and Mrs Carmichael in 2013 for some replacement windows in their central Cromer apartment, we had no idea of the impact our joinery would have on the surrounding area. The mid-19th century Victorian junior school and historic building was converted into a complex of private houses, now known as Normal Trollor Court, many of which were in need of replacement windows which brought the traditional style of the building into the 21st century.

Solution / Execution: After having seen Mr and Mrs Carmichael’s new joinery, it wasn’t long before we were contacted by the adjoining property owners and we were soon quoting for holiday homes and standalone bungalows within the complex. At the beginning of each project, we spoke to the residents about how we could ensure we met their individual needs as well as those of the property. Mr and Mrs Carmichael, Mrs Jamieson, Mr and Mrs Frost and Mr and Mrs Snape all chose to have their joinery finished in the original Vermillion Orange which was one of the striking features of the property in its earlier days as an educational establishment. Over two years, we manufactured two large hardwood screens which covered two floors of the properties, standard and stable doors as well as a series of flush fitting and stormproof casement windows, all of which featured multi point locking systems and brass ironmongery. All of the joinery had a minimum of B-Rated glass and Mrs Jamieson opted for A-Rated triple glazing throughout.

Result: In total we worked with four of the residents in the complex to bring their historic homes into the modern era with our high performance joinery whilst ensuring that none of the buildings’ long standing charm and character were lost. By colour matching our paint finish with that of the original windows, we were able to rejuvenate the vibrant exterior of the properties in this charming sea side town.